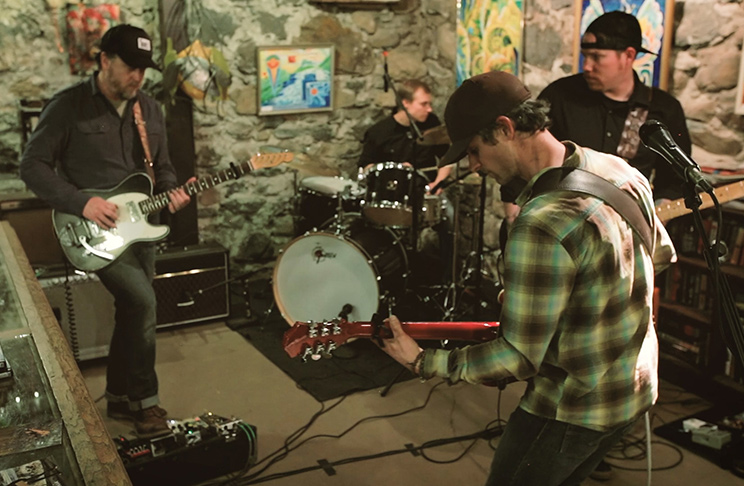 Forget The Roses is no stranger to the Dark Horse Coffee Roasters shop space. Our band has assembled there on a few occasions, after hours, with shop owner Drew Taylor to work on new original material and rehearse for upcoming gigs. It's a really cool space. It has personality and great atmosphere, especially for music. I love it… we all do.

But let me rewind a bit. Personally, I’ve been drawn to the space even before I began playing live music. So it is no coincidence that my first-ever live performance experience was at Dark Horse’s predecessor, the former Book & Bean, on an open mic night back in 2007. I was hooked from that point on… my musical journey, and all the opportunities that followed, began at what is now Dark Horse Coffee Roasters. It's a place that I’m very grateful for; it has a very special place in my heart. So you can understand how excited I was when Drew and Cassidy Taylor re-opened the space with their very quality coffee business. Not only do we share a love for fine coffee, but I learned upon befriending Drew that he shares my passion for the art of songwriting and musical performance.

It was only fitting then to have Forget The Roses, or FTR as we are typically referred to as, be the first band to perform a Dark Horse After Hours live music video session.

Morgan, Gabe, Cody and I jumped at the opportunity and worked quickly with Drew and Evan Buzzel (SBS Media House) to make the inaugural session work. We threw it all together on a stormy Wednesday night. Nothing would stop us. Everyone present was excited and optimistic, which ultimately lead to an inspired performance by FTR, spirited camera work by Evan, and Drew orchestrating the atmosphere.

Watching FTR's performance on this expertly produced live music video, as well as my short impromptu interview (which would later be coined a “Speak Easy”), it is evident that there is a mutual LOVE and admiration alive in the air.


A.D.D. was one of the first songs I wrote for FTR. It is a fitting song choice considering the way it has developed dynamically over the years. We all agreed that it was the perfect song for the occasion and venue.

Morgan pulled out some last minute heroics and created a subtle, but very atmospheric/thundering, fuzzy loop that was used the entire length of the song, along with some sporadic oscillating echoes. He even went as far as hand selecting a compression pedal that made my guitar warm and sparkly, and tightened up the rhythm. These very cool moves help deliver a much improved dynamic for this recorded version of A.D.D.

It's also worth mentioning that Cody and Morgan really made a conscious effort to make sure the mix was the best it could be for this live session, affording us the ability to get such a clean recording with only one channel to record with. It was what we had at the time, and we made the best of it.

“We made the best of it”.... Seems to be the theme of this first live session. Everybody stepped up and brought their Best Effort. And the performance and final product shines, regardless of the obstacles we may have faced.

We have 9 guests and no members online