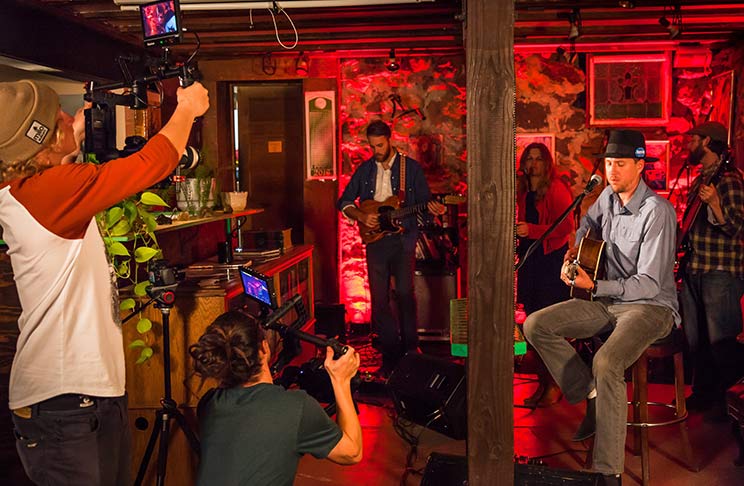 Shooting day arrived, Dark Horse closed at its usual hour, and the DWC tour van came ambling down the old alleyway behind the shop. Doors opened, out spilled Jesse, Jenni, Dave, Bryan and Brian. Introductions were made, locations were discussed, and we proceeded to trip over each other for an hour setting everything up. We scored some nice lighting from Evant Productions to mood-up the room a bit. Evan brought in the SBSMH team, kitted with their Transformer-looking camera rigs, to provide enhanced shooting angles, transporting you right in the action. Tahoe Truckee Community Television provided further lighting and sound support. Someone from Moonshine Ink was going to come, but didn’t make it until moments after we finished the shoot. Scott Thompson was on hand to capture stills. Finally, we were set up and ready to go.

There had been discussion about what song or songs to do. My vote was for “Midnight Ghost”.  Man, that song!  Glide Magazine started streaming “Midnight Ghost” about a week before the album was released and I got hooked. I pretty much listened to it all day. I pre-ordered the album; I was going to buy it anyway, but I made sure to pre-order it because I kind of felt guilty for streaming that song for free so many times. That swampy opening guitar riff that Jesse plays. Dave’s greasy opening bass slide. Bryan’s haunting slide guitar. The groove. And the harmonies! That song is one of those things that, to me, seems impossible not to have ever existed before it did. I can no longer imagine a world where there is no “Midnight Ghost” by Dead Winter Carpenters.  So I was a little outside of my body when it was announced they’d be performing that song.

We have 11 guests and no members online